Never drop the airplane in order to fly the microphone!

My career and other interests... 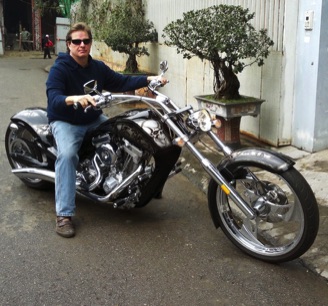 As a youngster I was interested in how things work and all things mechanical. Indeed, growing up on a farm with a father who also owned a metal fabrication and manufacturing business meant that I knew my way around a toolbox and a machine shop. By the time most kids my age were starting their first newspaper route, I could run a welding machine.

I was also remarkably interested in Space and Aeronautics - which should not seem surprising as I was born into the era when US President John Kennedy tasked NASA with the mission to conquer space and land on the moon. Naturally, my early career thoughts were to become an aircraft engineer or mechanic.

Anyway, under the Christmas tree of 1970 was one of the first editions of The Encyclopedia of Space. Then, for my 9th birthday, my grandmother gifted me a remote-controlled airplane. The final nail in the inspirational framework was Mr. Brown’s high school rocketry class, where I experimented with the idea of a vertically launched, rocket-powered glider (similar to the Space Shuttle). Sadly, on launch-day, half of it remained on the pad whilst the other half scattered itself in every cardinal direction.   During the years that followed I designed and built several model and full-size airplanes.

Related to flying, my first flight in a small aircraft occurred when I was 12 years old. Of course, I was a passenger but the pilot allowed me to manipulate the controls. I was hooked and began showing up at a local flying school when I was around 15 years old, solo’d not too long afterwards, and in the 40-plus years since first touching the controls have amassed nearly 24,000 hours of flight time and held positions, including:

I keep my mechanical skills current both with airplanes and with my car shop.

In 2002 - following a career which included; Flight Instruction, Bush flying, Air ambulance, Charter, VIP, domestic Airlines, Special Air Operations and Arial application - I joined an international Airline Crewing Agency which provided pilots to airlines around the world on both short and long-term basis.   Since then I've held positions as a captain on the Airbus A320 and A330, and the Boeing 757, 767, and 747.  I've been based in places such as; Malta, Vietnam, Singapore, Saudi Arabia, Pakistan, Seychelles, and China. After COVID struck and dealt us the turmoil that it did, I joined a cargo airline as a Boeing 767 Captain. I will never go back to passenger flying.

What’s next? No idea. My journey is an adventure with no particular destination, so only time will tell.

1. 1983 Engine failure due to contaminated fuel with forced landing in a farming field in Surrey, BC Canada.

2. 1985 Engine failure due to fuel system malfunction with a 180-degree turn back to the runway at Vancouver International Airport. Single Engine Aircraft. Single pilot IFR.

3. 1986 Propeller governor failure resulting in engine shutdown and diversion. I was a Line Instructor conducting a captain upgrade on an FO. Timmins, Ontario, Canada.

4. 1987 Building my own runway after landing in the sand at the airport with very poorly reported runway conditions. King Air 200. Northern Ontario, Canada

7. 1994 Loss of thrust in both engines due to incorrect maintenance procedures. Shorts Skyvan. KI Sawyer AF Base.

10. 2019 Bird Strike with resulting loss of instrumentation in Boeing 747 at San Fransisco, California.